One of our annual traditions is joining with a number of our Morris friends for a day of dance at the Easter Un-Parade on Monument Avenue in Richmond.  Our hosts for this event in More of Less Morris from Richmond.

The Un-Parade is a very popular event with large crowds of people and dogs showing off their Easter finery.  There is a carnival atmosphere which adds food, live music, and clowns.

This year the weather was perfect for our dance out.  Not overly hot like last year, nor raining as the year before.

Another aspect of this event that makes it a highlight of our admittedly limited Morris Calendar, is that we get to meet, dance and chat with members of several other local sides.

More or Less in Rags

This year included not only the usual suspects, our hosts More or Less,  the formidable talents of the Albermarle Morris Men from Charlottesville and our Border Morris cousins from Sheppardsville, West Virginia, but this year we were also joined by the fabled Mason Dixon Morris from Maryland.

Mason Dixon, for those unaware are an ancient side whose origins are lost in the long shadows of time and legend.  There are some who believe that it was the Mason Dixon Morris whose bells were found in the archeology of Jamestown Fort! 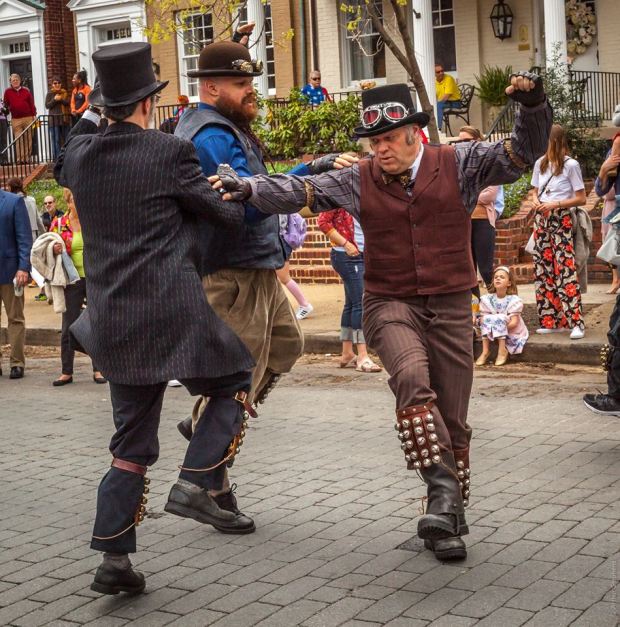 Today they dance mostly Molly while wearing a kit inspired by Steam Punk.

As to the Weasels, we brought six of our dancers, and in an unusual situation for us, or OWN musicians! We owe a great debt of gratitude to our friends Hudson and Clark for having joined us and played for us.  I hope they do so again! 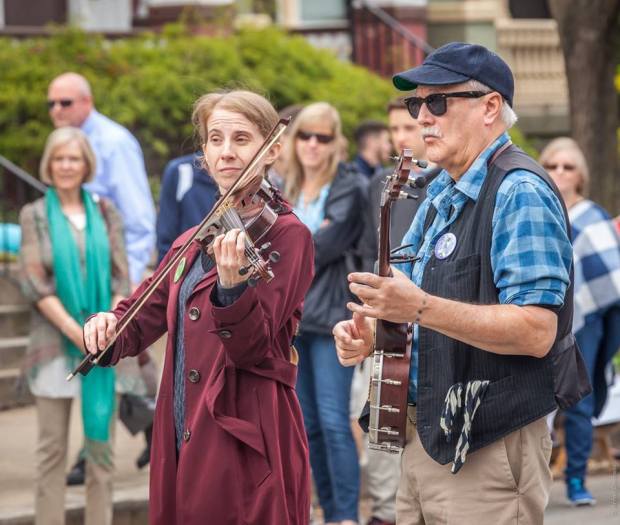 We owe a great debt of gratitude to our friends Hudson and Clark for having joined us and played for us.  I hope they do so again!

We danced most of our favorites, Shropshire Morris, Sheepskins, Not Not For Joes, etc, but we also added a new dance for the first time in public.  This was THE BURNING OF THE PIPER’S HUT by Breathless in Berthoud. 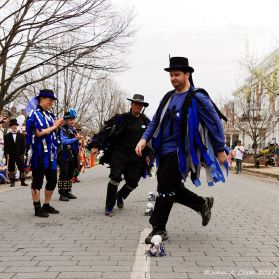 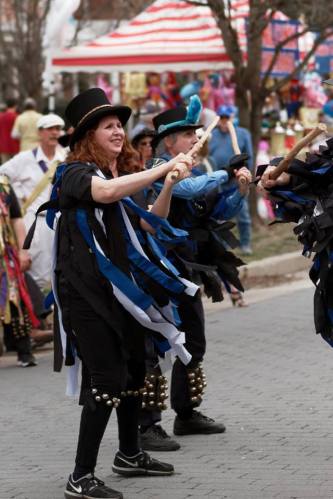 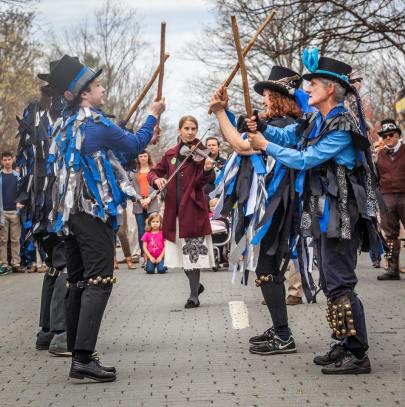 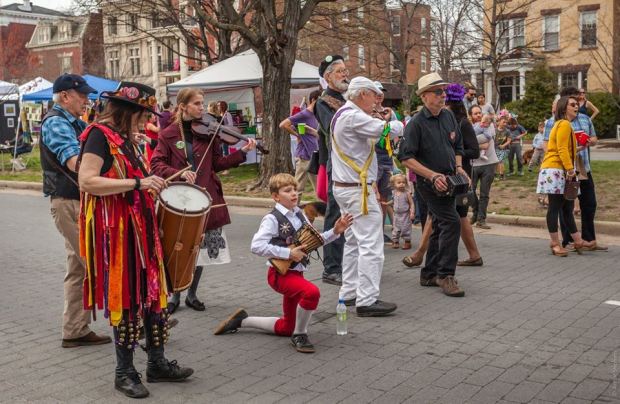 The Musicians Massed for Dilwyn

A great deal of fun was had by all, and we look forward to next year! 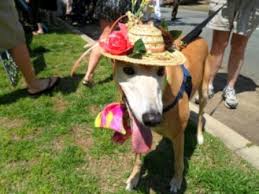 This Sunday we will once again be dancing out in Richmond in celebration of Easter.  This is a yearly event with our friends Albermarle Morris Men, Hicks With Sticks and the hosts More or Less Morris.  This year we will also be joined by newcomers Mason Dixon Morris.

The Ale coincides with the Richmond Easter parade on Monument Avenue.  We will be dancing somewhere around the 2200-2300 blocks between 1 and 5 with the exception of a lunch break somewhere in there.

I hope we will see some of you there!

Last Easter found the Weasels dancing out in Richmond as part of the Easter Ale.  This was a third year participating in what has certainly become a tradition and one of our most enjoyable events.

Our hosts for this is More or Less  Morris, based out of Richmond, VA who have the odd distinction, probably unknown to them until now, of being the only Morris Side I have ever played for.  It was several years ago at the Harvest Faire in Newport News, I think the tune was Bean Setting and I played it on a pipe and tabor.

We were also joined by the marvelous and skilled dancers of the Albermarle Morris Men.

and our West Virginia cousins, the Hicks With Sticks.

For those unfamiliar with the traditions, Hicks With Sticks are like us, a border morris side, we also share some similar taste in dances and British Morris side influences.  It is always a pleasure to see them and dance with them

The easter Ale is a very interesting little event.

It is attached to the Richmond Easter Parade which is a lively and colourful Richmond tradition.  There are many different musical acts, clowns on stilts, some very crazy clothing and, many over the top hats.  Quite a bit of colour, flowers, and excitement for people of all ages right there on Monument Avenue.  The fun is in no way limited to the two-legged creatures either.  A dog costume or hat contest (I am not certain which) is included.  I didn’t see any categories available for Weasels, however, typical.

The day begins with the Morris sides and their entourages arrive at a beautiful flat not far from the scene of the crime for some brunch,

coffee and general reuniting after the long cruel months of winter, all to the dulcet song of the Bullfinches.  At the appointed time we all make our way over to Monument Avenue and scope out a likely place.  This year we danced in some very pleasant shady little areas, though for a while are musicians were engaged in a futile battle with a brass jazz band.

Speaking of musicians, we found ourselves again in our too frequently occurring dilemma of no musicians!

We again owe a debt of gratitude to the musicians of the other sides who so kindly played for us.  Jim Morrison, Pete Kleeman, and Nick Blanton.  All three were very supportive, helpful and kind not to mention talented, but our better dances have more unusual and in some cases original tunes not well known. Nick very bravely offered to learn and play one and did a great job with Shropshire Morris (which sounds phenomenal on the English Border Pipes by the bye).  To get the weasely band started has to be the goal for this year. 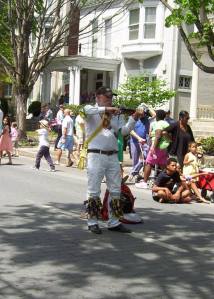 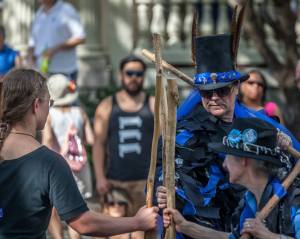 After dancing for a bit we break for a picnic lunch in a nearby backyard and then continue for some more dancing, usually in a different place than where we began.  finally, at five we end with a mass Cotswold dance and back to the start for a pleasant dinner and jollification with some very interesting and intelligent folk.  What an interesting and diverse eclectic people Morris Dancers are!

the usual culprits were present.  As mentioned, our repertoire was curtailed due to musician difficulties ( did I mention we need to start our band?)  We danced Cuckoos nest, both by ourselves and mutually with Hick with Sticks, as well Shropshire Morris, Tinner’s Rabbit, Donkey riding and Not, Not For Joes.  There was also an Irish Reel by Mark.   In the end, a splendid time was had by all.

In the end, a splendid time was had by all. We give our thanks out to the musicians I mentioned earlier, and all of the other sides who have been so kind and gracious to welcome our fledgling group under your wing.  We all look forward to next Easter!

Mark Getting some air time

Megan of the Hicks displaying what it’s all about!